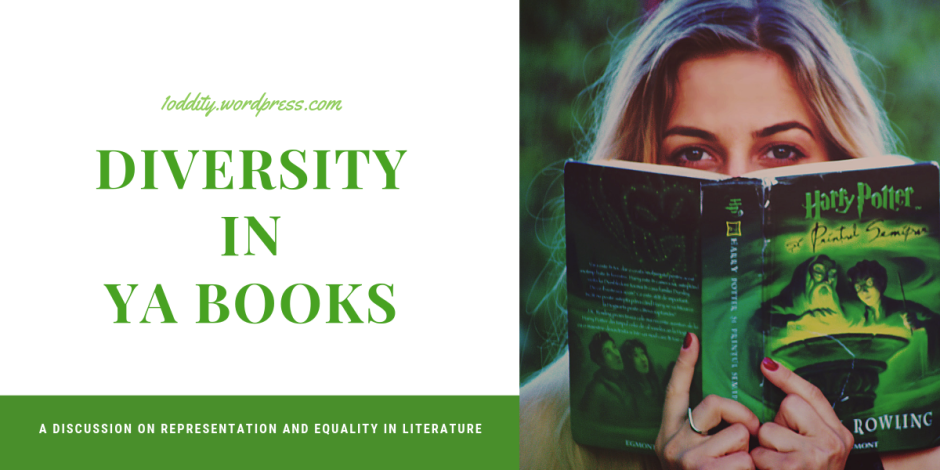 I’ve been thinking about this one very important, quite controversial topic that many bibliophiles and book lovers think about, often with different view-points.

Or, should I say, a lack of diversity.

~This post is specifically discussing race and color representation~

In YA, specifically. Yes, you’re rolling your eyes, because yes, you’ve probably read several posts on this by several book bloggers. If you’re a blogger yourself, that is. But so many people out there still haven’t, which is why these posts are still being made by several people just like me.

Someone who’s reading this will think, But there’s already so many diverse books! Why are you exaggerating this so much?

Only about 10% of the world’s population is white.*

Or at least show readers who don’t fit ‘the norm’ a version of themselves in media. Someone who looks like them, sounds like them, thinks like them.

Then there’s the question of old books. Of course, even twenty years ago you would see a lot less diverse characters. Some of those older books are still our favorites- take Harry Potter, Lord of the Rings, the classics like Pride and Prejudice. Even blockbuster modern books like Six of Crows. Some of them are harmful to POC (people of color) and incorrectly portray cultures.

Even if we want to be inclusive, say that we’re diverse, even if we believe that, does that mean we can’t love those books?

This post would be way too long if I went into too much depth about it, but I’ll reference you to a good post that does explain with detailed. Vicky’s post on problematic books is a real eye-opener and quite thought-provoking. These books don’t necessarily not have diversity, but they portray people of color incorrectly and sometimes harmfully. I encourage you to read it because you’ll surely learn something new.

That’s up to you. But even if you’re fine with both, some people aren’t. I’m a person of color. I’m a girl of color. And even though lots of times there are YA contemporaries that seem specifically catered to teenage girls, that’s not enough.

Because lots of times when one form of diversity (e.g. you have a character in a wheelchair) is present, authors completely lose track of everything else.

You might be thinking, stop being so picky. Why does everything have to be diverse?

I’m saddened about the fact that many (mainly international) readers
seem to make a ‘trend’ of calling out books to be problematic. This is
not happening so much over( )here in my country, maybe it’s because it’s
our culture to not dramatize things? I noticed that this thing is
increasing and I often think: “why can’t we just enjoy the story and
get lost in it? Why do we ALWAYS need to moan and groan about (a lack
of) representation? Why do we always have to find representation?”
Maybe it’s me, and I definitely don’t want to sound rude, but I enjoy
the story for the story and the writing and I’m not caring much for
representation. Lately it seems nearly all books and authors are
problematic which disturbs the joy of reading honestly. And sometimes
of writing an English book review or scrolling through book Twitter. I
understand people want/need to find representation, but it feels like
they are shoving it through other readers’ throats and if you like a
‘problematic’ book, you get trolled or whatsoever. I still will enjoy
Cinder and The Grishaverse and honestly I didn’t notice the ‘flaws’
you mention. Maybe it’s because I’m European, don’t know.

This saddens me. Not that they feel that way, but that they think that we always have to moan and groan. And mainly international readers feel that way. By that, the author of this comment means people of color.

Ok, that’s just sad. I agree that you can enjoy whatever books you want, although I believe you should acknowledge the problems and also promote good content, but that’s up to you. However, the us and them mindset that the author of this comment showed was quite disappointing.

The whole point of diverse books isn’t to be politically correct. It’s to show everyone someone who looks, sounds, and/or thinks like them.

We have a long way to go.

But, we’ve come a long way. Now we have many more #OwnVoices books and authors. We have much more black, Hispanic, and Asian representation. We still need more.

And if I wanted to make this post even longer, I could tell you that I want to see more South Indian authors and characters. There’s Indian stories, there are some- but they’re mostly North Indian and lots of times I still don’t see myself in those characters.

Do you see what I mean? We will always need more diversity, especially based on the (pretty slow) rate things are improving in.

What can we do?

We can support BIPOC authors (black, indegenous, and people of color), #OwnVoices books, and still enjoy our favorites that don’t have the best representation.

We can promote diverse books and less popular authors as well as really popular books.

I’d love to hear what you think about this post. Tell me your criticisms and your appreciations- if I’m saying anything incorrectly, please correct me! I’m always looking to grow and learn as a person.

41 thoughts on “Diversity in YA Books- a discussion”