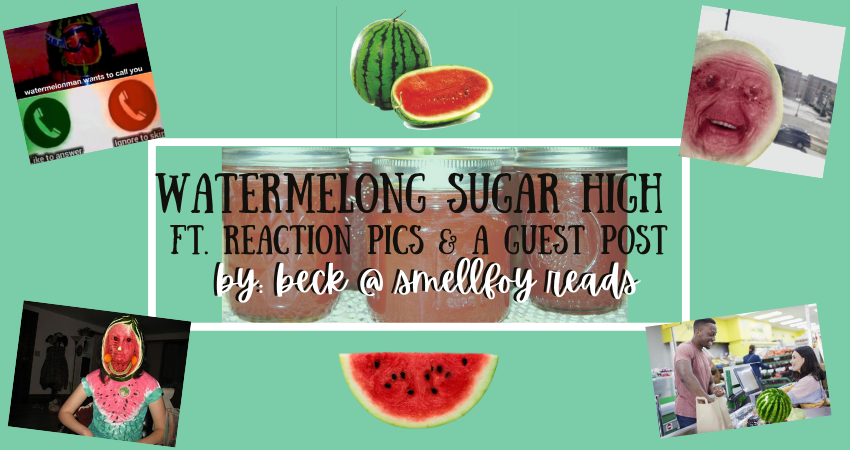 This is Aditi, the person who writes for this blog, in case you’ve forgotten me since I’ve decided that I’m too cool to write posts 😀

I miss you all a lot and I really want to start blogging again!! But that probably won’t be until mid-December (mayybe earlier but don’t count on it). So I have a wonderful post from the absolutely amazing Beck @ Smellfoy Reads! Go check out her blog right now :))

I’m going to let her take it away- but before that, here’s my deepest gratitude to Beck for OFFERING to write me a post (?!) and ACTUALLY DOING IT. I’m blown away.

P.S. the title is supposed to be “watermelong sugar HIGH (they HAVE to be high bc what the actual heck)”. yes ;D now the song is stuck in your head- perfect!

Have you met me? Have you seen me irl? I THOUGHT NOT. NO. YOu HAVEN’T. SO STOP MAKING ASSUMPTIONS.

Anyway it is meme time, my dudes! I’m going to rate some of the weird watermelon memes and pictures I have saved on my phone. I actually have a lot of those.

Oh and most of these memes I found at this terrific instagram page:: @ireallylikewatermelons

This picture actually has some history with me… My friend and I had a watermelon revolution on our class discord server because SOMEONE DELETED THE EMOJI WE MADE OF HER!! Idk why they did.

Anyway she gets a solid 69/69 for pure watermelonness.

I actually have these cups.

I love it. This kind of meme is my jam okay.

THAT’S ALL FOR NOW! I’D THANK ADITI FOR LETTING ME DO THIS BUT HONESTLY SHE SHOULD BE THANKING ME… JK JK JK I’M NOT THAT SELF ABSORBED THANK YOU SO MUCH ADITI IF YOU ACTUALLY TOOK THIS HAHAHAH AIGHT I’MMA HEAD OUT

I’m so excited to be posting this collaboration that has been in the works for around two months now!

In late March, Sophie and I started talking about a possible collab and we came up with the coolest idea ever 😉

Both of us recommended a favorite TV series and a favorite book series to the other. Then we both had to read and watch the other person’s recommendations and see how we liked it!

Sophie @ Me and Ink is definitely one of my favorite bloggers of all time because not only does she produce AMAZING bookish content (like, seriously) but she also has one of the sweetest personalities in this niche. I was so excited to collab with her and it turned out awesome! Check out her post here.

What I Recommended To Sophie:

I recommended the Percy Jackson and the Olympians series and Avatar: The Last Airbender to Sophie!

I recommended Avatar: The Last Airbender to Sophie because it’s probably my favorite TV show of all time! The characters are incredibly well-written, the worldbuilding is fantastic, the animation and music are beautiful, and everything about it is nostalgic and wholesome. I also think that Sophie will enjoy it because lots of our tastes are similar in books, so she might like this as well!

Rick Riordan is my favorite author, and this is the series where it all started. The characters are amazing, the ships are my favorite of all time (and that’s saying something, given that I ship a lot of characters) and the narrator, Percy, is hilarious. It’s a pretty popular series and it brings me back to my childhood every time I read it. Also, we’re getting a TV series soon, so I really wanted Sophie to read it so we could rave about it together!

What Sophie Recommended To Me:

I recommended this show because I love sitcoms, and this is one of the best. I genuinely find it hilarious, like even after I’ve seen the episode ten times I’m still laughing. Plus, the characters are just as wonderful as the comedy. They display a variety of traits and they have a beautiful found family with lots of healthy relationships. What’s not to love??

The Raven Boys: This is definitely a unique series, please don’t ever ask me to describe the plot or genre. But the reason I fell in love with it was because of the lyrical writing. There is always something new to discover within the words, whether some new symbolism or foreshadowing. Secondly, I love the characters. There is something very real about them, and they are all so different but bonded by their love for each other. The series is definitely a journey, one I’ve always loved being a part of.

My Review of ‘The Raven Cycle’:

WOW. This series completely blew me away! I loved each book so much. Here’s what I rated the books:

WHAT I LOVED ABOUT THE RAVEN CYCLE:

I would just like to put a disclaimer that the beginnings of all the books are a liiiittle bit slow but if you push through it, the books are on a whole new level!

I’m so excited that I found a new favorite set of books too so this was a total success for sure! 🙂

My Thoughts On ‘Brooklyn Nine-Nine’:

Wow. I thought that I’d never love a series as much as Avatar and while I’m still right (hehe) I loved Brooklyn Nine-Nine much more than I expected to! It’s a sitcom in a police station and I adored the characters from the beginning.

Y’all, the characters are great! We have Jake, who’s a great detective but is also kind of a total goofball (<3 ❤ <3) and Amy, the smart, organized detective who he’s always arguing with (<3 <3). And then we have Captain Holt, the new captain who’s strict and completely unlike their old cap, and Sarge, a totally rad role model and dad. Rosa, who’s a badass and completely awesome, and Gina, who’s always complimenting herself and is also hilarious. And, of course, Charles! He’s Jake’s best friend and partner in crime (well, jk, they’re cops. haha). Then there’s Hitchcock and Scully (I ship them lmao).

Also, Peralta-Santiago for the win!!

MY FAVORITE EPISODES in no particular order:

B99 has covered some serious issues, too. It had an episode relating to sexism in the workplace and the #MeToo movement (but it was handled really well IMO) and an episode where Terry gets stopped because he’s a black man.

Despite that, B99 is a comedic show above all else and it’s a really really fun watch!

That’s a wrap! This collaboration with Sophie was super fun and I’m really glad we did it. I found two new amazing series- both of which are now favorites 🙂 Go read Sophie’s post here, because she’s going to be sharing her thoughts on reading Percy Jackson and watching Avatar: The Last Airbender for the first time!

Have you read The Raven Cycle and watched Brooklyn Nine-Nine? What are your thoughts on them?

I’m really excited to have a guest post today from our very own Ash Ronnel, a dear blogging friend of mine who is also part of The Diamond Village, our fantasy-themed, character-based blog that four of our other friends and us share!

So… this post was last opened in my drafts around… three months ago?? YES, I’M SORRY FOR PREVENTING YOU FROM READING THIS AMAZINGNESS. LIFE TOOK OVER. But here I am now, and please please please check out Ash’s blog and follow!! She’s brilliant and super fun to chat with 😉

Coincidentally, I’m in a reading slump right now 😭 and I will be 200% using these tips! I already did step 1, which, for me, was not reading for, like, three months O.o haha. But I miss books! And reading! So I’m going to start on some books at home this month!

I’m ALSO in a bit of a blogging slump right now, sadly, tell me any tips you have! 🙂

END_OF_DOCUMENT_TOKEN_TO_BE_REPLACED I’m excited to present the first of a hopeful series of guest posts by wonderful fellow bloggers that I’ve interacted with. Firstly, we’re starting off with my wonderful friend Emma @ AFCTL who is super sweet and funny and has the best discussion posts!

Take it over, Emma!

Hiya bookish people!
This is so amazing! Aditi has a beautiful blog, and I love her so much she is honestly AMAZING! It is so amazing that I am able to have a post published on One in a Million, so hi! I just realised I didn’t introduce myself, so here I go! My name is Emma and currently I am independently running my book blog A Few Chapters ‘til Love! (My co-blogger is currently on hiatus :/) Again, I am so happy to be writing here! Right, let’s get into the post! END_OF_DOCUMENT_TOKEN_TO_BE_REPLACED

AHHH GUESS WHO’S HERE TODAYYYY can you tell who that was?

Today’s a special day! Because we’re here with a collaboration involving myself and Vaishnavi! It was so fun to do and I’m extremely glad that I know her flesh-and-blood as well! 😀 (remember that conversation we had about irl vs. flesh and blood? you betrayeddd meee)

This is also the third collaboration I’m doing- check out my collab with Grace and with El by clicking on the link!

Well, right in front of my community we have a beautiful tranquil pond where the only noises are the chirping of birds and insects, rush of water, and honking of geese and ducks. I go there often, sometimes with my brother or cousin(s) but never before with Vaish- it was so fun and we even ate plums for dessert! (more on that later). Vaish published the first half earlier (find her post here) and I’m presenting the latter half right now! END_OF_DOCUMENT_TOKEN_TO_BE_REPLACED So.. I missed my posting date. Twice. *runs away in shame* I was supposed to post on Sunday and Wednesday (if I wanted) and… here I am, on Thursday! But that’s all good since you are a forgiving, kindhearted bunch *puppy eyes* right?? ANYWAYS.

I’m supa~dupa excited today because I’m doing a collab with my awesome bestie , El, and it’s going to be AMAZING (because she came up with the idea, of course)!

This collaboration, Don’t Judge A Book By Its Cover, is where El and I each go to the library and randomly close our eyes and pick a book so we can’t judge based on anything- just randomly. side note: I will write normally, El’s will be bold.

Then I told her my book and she told me her book. I reacted to hers and she reacted to mine. Check out my reactions and her book on her blog!

Here’s the format we’ll be doing:

My book is Into The Bright Unknown by Rae Carson. END_OF_DOCUMENT_TOKEN_TO_BE_REPLACED