Have you heard of Annie Sullivan? No? WHAT ARE YOU DOING. GO SEARCH HER UP.

If you have, yay! I’m glad to be promoting her newest release, Tiger Queen and have a super cool interview with her protagonist, Princess Kateri, for you today! Thanks to FFBC for letting me take part 😀 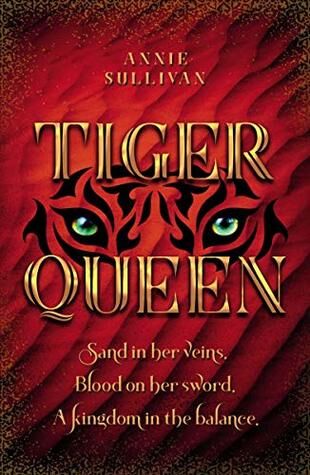 From Annie Sullivan, author of A Touch of Gold, comes Tiger Queen, a sweeping YA fantasy adventure that tells the story of a fierce desert princess battling to save her kingdom. Fans of Rebel of the Sands and Meagan Spooner will devour this retelling of Frank Stockton’s famous short story, “The Lady, or the Tiger?”
In the mythical desert kingdom of Achra, an ancient law forces sixteen-year-old Princess Kateri to fight in the arena to prove her right to rule. For Kateri, winning also means fulfilling a promise to her late mother that she would protect her people, who are struggling through windstorms and drought.The situation is worsened by the gang of Desert Boys that frequently raids the city wells, forcing the king to ration what little water is left. The punishment for stealing water is a choice between two doors: behind one lies freedom, and behind the other is a tiger.
But when Kateri’s final opponent is announced, she knows she cannot win. In desperation, she turns to the desert and the one person she never thought she’d side with. What Kateri discovers twists her world—and her heart—upside down. Her future is now behind two doors—only she’s not sure which holds the key to keeping her kingdom and which releases the tiger.

Annie Sullivan is a Young Adult author from Indianapolis, Indiana. Her work has been featured in Curly Red Stories and Punchnels. She loves fairy tales, everything Jane Austen, and traveling and exploring new cultures. When she’s not off on her own adventures, she’s teaching classes at the Indiana Writers Center and working as the Copy Specialist at John Wiley and Sons, Inc. publishing company, having also worked there in Editorial and Publicity roles. You can follow her adventures on Twitter and Instagram (@annsulliva).
Website: https://anniesullivanauthor.com/
Twitter: https://twitter.com/annsulliva

An interview with Princess Kateri:

The Desert Boys—the gang of thieves who steal water from us—killed my mother and my baby brother when I was six. I remember seeing the agony on my father’s face when he found their bodies. I won’t let anything like that happen again. I am going to be the best—a force to be reckoned with—so that I can finally bring down the Desert Boys.

The memories I have with my mother are beautiful. She taught me to Sand Dance, where we trace patterns into the sand with our feet. My father was much stricter, but I learned to respect him and his strength.

Ha! That would mean losing in the arena, and I have no plans to lose in the arena. I have been training for this moment since my mother died. Plus, I promised her I would lead her people. That’s a promise I won’t be breaking.

My father is my most trusted advisor. He used to train me to fight until Rodric showed up. But I don’t trust Rodric. He just appeared out of the desert knowing how to fight. He’s good, but I want him gone before I take the throne.

Wowww, Kateri’s dedicated! Y’all should read the Tiger Queen, and comment down below what you think of it!

DON’T FORGET TO ENTER THE GIVEAWAY!!