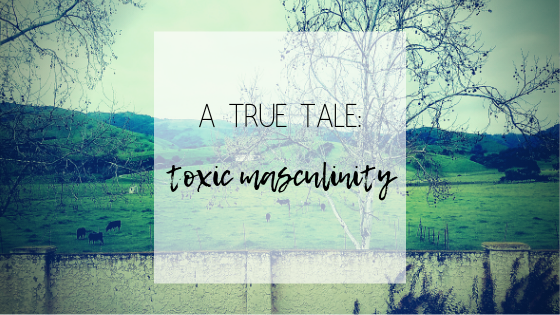 It’s nasty, it’s true, and we don’t want to admit it. Toxic masculinity is referring to the cultural norms ingrained into the society which illustrate a certain perspective of the masculine side. They force many boys and men to think and act a certain way that hurts our society as a whole in the long run.

Toxic masculinity isn’t degrading or demotivating men to stop powerful and caring actions. Lots of actions that boys and men do are perfectly fine, but those few that aren’t are quickly taking root in the soil and poisoning our society.

See, something like holding the door open for a special lady in your life is absolutely sweet. There’s nothing wrong with that. But when this action feels like a requirement, when a kind gesture becomes always mandatory, this is when problems emerge.

We, the society, tend to have certain imagery for men and women that have been around for centuries, maybe even thousands of years if mythology is to be believed. Women were the house-makers, the cleaners, the cookers. They were the tender, gentle parent and normally had the main role of watching over the children.

Men were the bread-winners. They worked outside the home. They hunted and gathered and later started working as masons and blacksmiths. This evolved into more modern positions such as engineers and politicians. Men were the traditional “pillars of the family”.

Today we recognize that men and women are equal and roles that were previously held by one of the genders are now open for everyone. Both men and woman hold positions of leadership. Several men take ownership of parenthood and play an active role in raising their children. Lots of women don’t feel the need to marry to accomplish something in their lives. Many men are stay-at-home dads.

Boys (and some girls) as young as twelve have learned inappropriate and disgusting terms. Overhearing the conversations of sometimes ‘popular’ middle-school boys, oftentimes the sports players, you might hear crude language, sexualization and objectification of girls in their own classes.

Some male classmates make sexual remarks about middle-school girls drinking from their water bottles. What they think is funny makes us uncomfortable and disgusted. Being called a b*tch for begging them to work on a group project is more common than you think. When running the mile, some boys actually commented on and laughed at an 8th-grade girl’s ‘abs’.

Why? Why all of this shaming and inappropriate talk at such a young age?

Because at a young age, boys are taught that girls like this. And this. This is cool. This is hot. This is sexy. Do you want to be popular? Act decades older than you really are. Make comments that are inappropriate regardless of age.

But it’s not cool. It’s not funny. It’s harmful, demoralizing and plain shameful. These people are partially to blame- the other part is the media. Books, movies, internet~ you find memes and stories about the nerd girl and the bad boy and how he convinced her to be with him using flattery (in other words inappropriate language) and charm. How the girl always enjoys the attention.

However, toxic masculinity isn’t just harmful to women and girls. Boys are effected as well. Society has determined that the men with six-packs, the ones who play football and work out for hours a day are the ones who make it big. Make it happy. The quiet, more shy boys are thrown out the door. Make your own path. You’re not wanted. Because if you see every television ad, every marketing model, they look around the same. Same abs and chiseled muscles.

Toxic masculinity enjoys making boys believe that they can’t show their emotions. Girls can cry, can scream, can make a fuss when something is bothering them, but boys? Oh no. They must remain stoic and expression-less.

This is a dangerous and unfair philosophy. Everyone should be allowed to express their emotions however they want to. Here’s a quote from Houston Press:

An FM radio DJ (ask your parents, kids) in San Antonio decided to rent out the Alamo Drafthouse for an all-dude screening of Metallica Through the Never. It was a rather patently obvious response to the women-only screenings of Wonder Woman that led to one of the most massive mantrums I have ever seen in my life. I would guess that the DJ expected one of those “if the tables were turned, the feminists would riot” reactions men loudly predict but that never actually happen because male-only spaces are not an uncommon or shocking thing.

The event promised dude-seating, meaning that there would be empty seats between all the audience members, and no man would have to sit directly next to another. I’d laugh, but that is the saddest thing I have seen from my gender in a while. Women went to see Wonder Woman so they could all sit and celebrate the film together. Men, apparently, need a couple of feet on either side lest someone think they’re gay. Or worse, they sit next to an actual gay Metallica fan and get hit on. Pretty much nothing proves why women wanted their own exclusive screening of a movie better than this poisonous bit of masculine cultural conditioning.

So please. Think about this. Really, really think. Then tell me in the comments:

Am I right? What does toxic masculinity mean to you?

Don’t Forget To Be Yourselves,